Converting one author to self publishing - Authors A.I.
Skip to content

Self-publishing is hard work, but benefits are many

What’s your goal as an author? Literary acclaim? Creative fulfillment? To hit the bestseller lists? To make a living as an author?

All of these (and more) are praiseworthy goals. And there are many paths to achieving them.

Increasingly, the most assured way of hitting many of these goals is through self-publishing. So it’s disappointing that, in 2020, the myth still persists that self-publishing is somehow not really publishing, that your book writing can only be validated if you’re published by one of the major publishing houses.

Here’s a story about an encounter I had with a women who held that view.

Last year at my first NINC (Novelists Inc.) conference, I was sitting at a lunch table with a group of indie authors. A person asked if she could join us. We scooched over and she started talking.

“It’s so annoying that all these independent authors are here. So unprofessional.”

We all just smiled.

“I’m sorry,” she went on. “I’m just annoyed. I got a rejection letter this morning.” She looked directly at me because I was right next to her. “Ruins the whole day, you know?”

She gave me a look. “You’ve never had a rejection letter?”

“How many books have you published?”

“And you’ve never had a rejection letter?”

“No, but I’m one of those unprofessional indie authors.” I pointed around the table. “We all are.”

I wanted to say something to save her, but I’d heard enough of the jabs over the days I was there, so I just let her fumble a bit. Then she really stuck her foot in it.

“I guess I understand. Some writers choose to go the easy route because it’s incredibly challenging to work in traditional publishing.”

Why would I want to lower my income to $100,000 just so I can get rejection letters?

You could almost see the steam coming out of the ears from the indies at the table. But we were polite, and I kept my cool. “Probably true. We only have to run our own businesses, do our own marketing, work without advances on royalties, deal with editors directly, get our own cover art done, and risk our own money on the hope of success. That’s in addition to the writing, of course.”

Everyone nodded, putting her on the defensive. “Oh, well, I’m sure there are challenges on both sides. I’ve been publishing for over 15 years and I could tell you stories.”

Then she put the perfect pitch over the plate.

“I’m just saying it’s a shame because you could be making nearly one hundred thousand dollars a year, if you worked like I do.”

Me, being kind of a tool, replied, “Why would I want to lower my income just so I can get rejection letters?”

I motioned around the table again. “There’s not a single person here who makes less than six figures. A few make seven.”

We all went back to our discussions, leaving her to stew in that for a while. She said nothing, until around dessert.
Then …

“I know I don’t deserve it,” she said, “but I don’t suppose any of you would be willing to give me some assistance in understanding how the independent stuff works?”

That’s when she got to see what it really means to be an indie. Instead of saying, “Flake off, indie-hater!,” we showed how tightknit we can be as a community. We gave her some pointers, a few months later she told me she’d decided to publish the book her publisher rejected. It made over $5,000 in its first 30 days. So, yeah, she’s a convert, and now a hybrid author.

Determine what you’re really after

The financial benefits are just one aspect of self-publishing. There’s also the freedom to write the stories we want, to promote our books as we wish, to interact with our readers, to set our own schedules and much more.

So the first question I always ask authors is, “What’s your goal?” Not what goal do you think you should have, usually based on the success of others, but what your actual goal is.

For example, if I really wanted to turn on the jets, I’m confident I could double my income, but in so doing I would have to give up things I don’t want to give up (my company ReaderLinks, music, etc.). Those other things take up time I could be using to launch my author career higher, but I love being hands on with that stuff. I’m not giving it up just for more money.

For some authors, it’s not about money at all. It’s simply love of the craft. They’ve just fallen into the belief that if they don’t make a living at it, they’re failing. They’re really not.

My goal, your goal, Steve’s goal, Denise’s goal (I’m just making up names here), they’re all different, and none of them are wrong.

A suggestion: Create your master goal and then start small, taking small steps to get there. If you want to be a full-time author, how much do you absolutely have to make every month? I’m talking if you had to eat ramen noodles here. Then give it everything you’ve got to get there. No excuses allowed. Fight for it, learn everything you can, dig in, and make yourself win. After you’ve met that initial goal, adjust your sights and take the next step toward your overarching goal.

One thing I’ve learned about myself is that it’s more about tenacity and hard work than anything else. My biggest obstacle has been — and always will be — me. 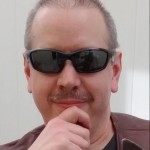 John Logsdon is an author who writes urban fantasy, science fiction, fantasy, Arthuria and GameLit. His books are racy, crazy, contain adult themes and language, are filled with innuendo, and are loaded with humor and snark.